Emilio Calatayud: If people don’t set boundaries for their children, in the end, it will either be life or the law that will do it for them

When he was 13 years old, in 1968, his father enrolled him, due to behaving in a disorderly maner, in the boarding school San Jose de Campillos (Málaga), a place with a reputation for being a strict correctional; this experience had a deep impact on his life and oriented his future professional specialization. In 1977, he graduated from law school (ICADE) at the Deusto University. After considering other alternatives such as opossing Internal Revenue inspections, he joined the judicial career in 1980 and was assigned to Guimar, Tenerife as a district judge. In 1984 he was assigned to the Granada courts and he was promoted to a magistrate in 1987. He specialized as a juvenile judge and in 1988 he became the head of the Juvenile Court in Granada, where he served as an alternate judge of penitentiary surveillance. Between 1993 and 2001 he was dean in the Granada courts.

In previous publications posted by La Web del Maestro CMF, Judge Calatayud referred to the following topics “Permanent expulsion doesn’t lead anywhere, children must be in school” and “ We have gone from being an authoritarian parent to being a comrade parent” being the first one of the two , the most visited by our users in 2018.

In his blog, Judge Calatayud wrote the following: “Setting boundaries for children is not an option, it’s an obligation. I know it’s annoying, it’s not easy: you have to sustain dialogue, you have to discuss and you have to also be an authority figure…, you have to work hard. Children do not have it easy, but neither do parents. It was also difficult for me to ground my own children, but if we don’t set the limits for our children, in the end, life or the law will do it for them. We can do it with love but both, life or the law tend to be harsher.”

In a previous publication, the Spanish philosopher Jose Antonio Marina referred to the following:

Children need only three things, according to Jose Antonio Marina, to grow up happy and healthy in all ways.

María Jesús Álava Reyes, with a degree in Psychology from the Complutense University of Madrid and a master’s degree in Pedagogical Psychology, has been researching for more than 30 years in the field of clinical, educational, and occupational psychology, answered Alicia Polo’s question: At what age should we start setting limits?

María Jesús Álava: Let’s see, Alicia, look. You have said it very well: “At what age?”, since they are babies. Since the moment they are born. Some might say: “My God, since they are born we’ll need to set guidelines, rules, and limits? Poor little ones!” No, not poor little children. We have to help them from birth. Let’s see, in psychology, as in almost everything, were theories which have been proven dangerous and wrong. And one of the most erroneous theories that has done the most damage in the education of children has been, precisely, that children do not need rules, they do not need guidelines, they must live in absolute freedom. This has been a drama, a drama! In the United States they realized it soon, they apologized, but here in Europe the notice came later, and in Spain, it seems that it has been difficult for us to come to this realization. Those guidelines, those norms, those habits have to be according to their age.

Let’s say, when the child is a one year old, you’ll be able to ask him that if he ever happens to run and colide with his classmate and then bite them, because he still doesn’t know how to express himself, you will barely scold him because you know that you will simply tell him that he can’t do it, but he is not doing it because he wants to, he doesn’t control his movements yet. It is very different if he were agrressive at age 5. Then, what is it that gives us the measure of the guidelines? Common sense, please people, common sense. As barely as we take a little bit of distance, you imagine the scene, you stand up here as if we were in an amphitheater and say: “Let’s see, is this logical?”, you will see when the child is pulling your leg, what you can do. And also, ultimately, when you have doubts, you always have the other part of the fundamental team, which is the educational team, that you can ask and you can seek help. But, let’s see, are guidelines and rules necessary? Yes! Is it sometimes possible to negotiate with the children? Yes, it depends, according to their age, precisely to help them, so that they grow up, so that they take responsibility for certain things, but the limits, Alicia, we have to be very clear that they are never negotiable. If you cannot ride a motorcycle, you cannot ride a motorcycle. 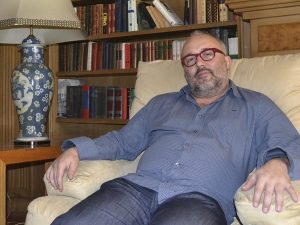 Daniel Cassany: Teachers are exhausted from spending so much time in front of screens
Jorge Barudy: Mirror neurons recover in loving surroundings where empathy flows
Eric Mazur: The interaction between the teacher and the student does not need to be synchronous, because the teacher can teach the class and then send the class...
Pilar Serrano Burgos: I don't know why we continue to overrate the importance of writing and reading and completely forget about many other things that we are a...
Yuval Noah Harari: “We educators need to teach communication, collaboration and critical thinking.”